Jaws 2: We’re riding the gravy train, why bother with a new script?

What this film has, is that it retained much of the talent from the first film. In fact, there was enough talent that they pulled of a pretty successful rerun of the same story twice. It’s not a good film, but after watching Amityville 2, it’s not a bad sequel. Jaws 2 doesn’t even make us sit through the old  – “Oh, I’m not dead yet!” routine. That’s commendable all by itself.

Hmm, Amityville 3 and Jaws 3 are both 3D. I’m sure that’s not going to just be gimmicky crap. I expect to see forceful returns with great scripts, top notch talent and performances to knock my socks off. I can’t wait to see … 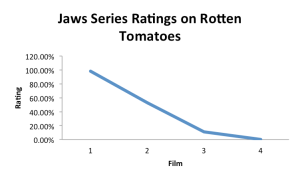