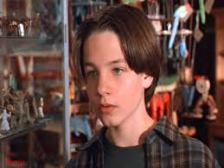 Whaddaya Think? Do I have a shot?

Small soldiers is full of surprises. Right out of the box there’s the mystery of who screwed up and allowed a film about toys coming to life (one of my son’s favorite daydreams)  get a PG-13 rating. This, more than anything, probably led to the disappointing box office returns of $53M on a heavy $40M budget.  The large budget helped do a totally passable job animating the soldiers / monsters around which the story centers as well as hire Tommy Lee Jones as a voice talent, Phil Hartman in his last film role, and Kirsten Dunst – granted, she hadn’t yet achieved the peak of her success when doing this role, Jay Mohr and Dennis Leary.

Nevertheless, we let our 8yo watch this and saw nothing wrong with it other than some language from Leary, which, to be honest, our son has heard before. He loved the film and both my wife and I thought it was a total success for our Friday night movie & pizza ritual.

I’m totally in the mood for Mr. Average

The funniest thing about the whole film is how unrealistic any relationship between Dunst and Smith (the two lead child actors) was. I don’t mean to be particularly harsh to Smith, but he was still a young, goofy kid, while Kirsten Dunst was already getting to be way to attractive for him.

Rotten Tomatoes gives it a 47%

I give it a 7/10 for anyone who wants to watch a fun movie with their kids.