This cheap hit from the 80s was by a band that used to be something. Something extraordinary.

But like so much else, when some of Jefferson Starship (nee Airplane)’s members needed cash to live on and that meant hits. So they did what it took to make that happen. In a Vanity Fair interview, Grace Slick explains,

In the 80s we weren’t writing our own songs…I like to write my own stuff or have the band members write their own stuff, and we weren’t doing that. I was in my 40s and I remember thinking, God, this is just awful. But I was such an asshole…Here, we’re going to sing this song, “We Built This City on Rock & Roll.” Oh you’re shitting me, that’s the worst song ever.

That’s what you get when talent is wasted: commercial success without an inch of depth.

And what do you do with a song like ‘Nothing’s gunna stop us now?” You put it in a movie that reflects the song and the band perfectly.

I want to argue that Andrew McCarthy, Kim Cattrall, James Spader, and Estelle Getty all have talent. But instead of using that talent when they got together, they made “Mannequin.”

Wait. Did I just say this guy has talent? I did. You just can’t see it here.

Nevertheless, many Philadelphians, like myself, liked the film anyway. Like Rocky or Philadelphia, it put the city in the spotlight, making it a character in the story. In this story, that character was the iconic Wanamaker Building on 13th and Market Streets 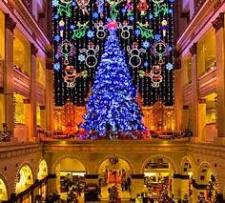 The Christmas Show at Wanamaker’s / Macy’s – an annual tradition

That doesn’t make it any less terrible a movie. And to add insult to injury (just like Jefferson Starship), it made money… nearly $43 Million.

Mannequin asks its viewers to suspend disbelief not just in one aspect of the film (like The Force in Star Wars), but pretty much in everything all through the movie.

Example: Kim cattrall plays an Egyptian woman displeased with her betrothal to a camel dung salesman. Natually, she prays to the Gods to save her and – whisk! She’s gone. Apparently, she made a few stops along the way, meeting Christopher Columbus and Michelangelo, but then she winds up in 1980s Philly locked inside a mannequin and can only reveal herself to one man.

That one man is Andrew McCarthy, a young man who can’t keep a job for anything until he meets -and saves the life of Estelle Getty -who happens to own whatever they call the Wanamaker store in this film. Out of gratitude, she hires McCarthy and will later even promote him to VP (oh no! SPOILER!).

James Spader plays the straight man / bad guy for a laugh and doesn’t get it for anything except his hairstyle and over the top mannerisms. He’s in it for the cash and has sold out to the other, ‘evil’ department store (really) who is trying to get McCarthy and his mannequin to jump ship and join them as they crush Wanamaker’s out of existence.

There’s lots of bad music, terrible acting and cheap film tricks throughout the film as we learn to feel for the guy who has a crush on an oversized doll. I’m reminded of Electric Dreams, Her and men who love blow-up sex dolls. Although painful, I did make it all the way through.