(a really crappy movie with the science creds of The Flintstones?!)

No, it’s not. It’s missing the last pair of chromosomes, see?

(yes, they were looking at the picture shown above; No, I don’t think they know what chromosomes are)

It’s asking us for the right answer.

It wants us to put in

the missing pair of chromosomes.”

Look it’s DNA! It’s not a very good model of DNA, but it IS amazing that you got it to rotate around nothing. That’s like magic!

I don’t know what it is. It’s supposed to depict DNA, but it doesn’t look very much like the real stuff.  in the top (computer drawn) picture, I guess the four colors are supposed to represent the four bases? No. That can’t be, because it looks like each colored base is connected to one of the same color. It’s also more of a simple twist than the double helix of DNA. Here’s a clearer look at the difference: 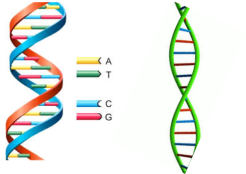 It is kind of cool to imagine that Mars was created – as we know it today – by a catastrophic collision that destroyed an ancient civilization on the previously vital world.

But that’s about it. Everything else in this movie is derivative at best and simplistic the rest of the time.

Hundreds of millions of years ago, there

was a sudden explosion of life on Earth.

No one has ever understood

why or how it happened.

This idea of space seeds comes up again and again in films. I don’t have a problem with it specifically. It’s something we might need to do in a couple of years if Earth becomes as uninhabited – and who knows, maybe it is something that happened here. What I do have a problem with is the notion that this actually solves any mystery about the genesis of life, rather than just shifting the location of that event from Earth to somewhere else.

But the insult to science doesn’t stop with biology. Physics gets its knocks too. During the space flight, zero G looks like its often portrayed simply by people swaying about a bit while they talk to one another as if they’ve just stepped out from a fraternity kegger in order to discuss interplanetary travel.

Once our heroes get to Mars, they find that it has a gravity pretty much identical to Earth. Realistically, the gravity on Mars is about 3.7 m/s squared. That’s about a third of what we experience on Earth (9.8 m/s squared). This isn’t quite lunar gravity, but much closer to lunar than Terran gravity. Nevertheless, there is never – not once – and indication that the astronauts are experiencing a difference. After all, a 200 lb man will weigh in at a little less than 70 lbs on Mars. If I weighed 70 lbs, I would be having fun with it.

I guess at its heart, Mission to Mars never decided what kind of film it wanted to be. Is it an exploration film? Is it about spaceflight and interplanetary travel? Is it a disaster film? A rescue Film? An alien film? It may have helped to pick just one or two of these ideas instead of trying to encapsulate them all.

It might also have been a good idea to hire a science consultant too. And listen to him or her.

The National Aeronautics and Space Administration, known throughout the world by its initials NASA, signed a Space Act Agreement with “Mission To Mars” to participate in the film. The production worked very closely with NASA for over a year, relying on the expertise of a number of invaluable consultants, and NASA representative Bobbie Faye Ferguson spent a great deal of time on the set, liaising with the filmmakers and cast on a number of points of authenticity.

Former NASA astronauts Story Musgrave,…and Joe Allen, … served as technical advisors on “Mission To Mars.” Their work began during the development phase, reviewing the script for accuracy, and then Musgrave and Allen met with the cast before shooting began, and talked about their experiences in space.

Perhaps these meeting occurred only late at night and after everyone had been drinking excessively. I was sure no one reviewed this at all.

Once I started looking for it, lots of people have written about the horrible science in this movie. Some examples:

By the way, India recently sent an actual spacecraft (unmanned) to Mars. Their budget: $73,000,000. I’ll bet they get the science right. 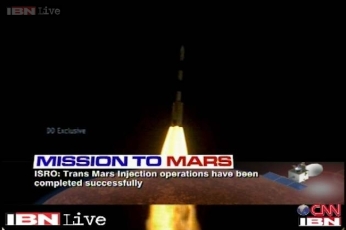