Well, I mean, not in a pet sematary. At least not one high in the hills of Maine where the ground is stonier (like that of a man’s heart).

Stephen King’s Pet Sematary is one of his more cruel books. From the wikipedia site on the book, “King’s daughter Naomi buried her cat “Smucky” there after it was hit, and shortly thereafter their son Owen had a close call running toward the road. King wrote the novel based on their experiences, but feeling he had gone too far with the subject matter of the book it became the first novel he “threw away.” Or, as James Smythe of The Guardian puts it: “so wrong, so dark, he put it into a drawer and thought he’d never publish it.”

Of course that’s all about the novel.The film was something else. 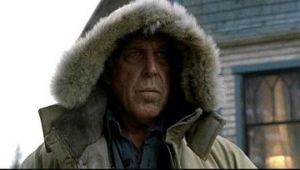 Casting has always been one of the issues that stands out to me. Louis Creed (Louis Creed) and his wife, Rachel (Denise Crosby – or should I say, Lieutenant Tasha Yar), the two central characters were probably least well cast (in my opinion), but Jud Crandall  (Herman Munster / Fred Gwynne) and the couple’s son, Gage (Miko Hughes) make up for it in many ways. Gage’s character is simple, he’s just an adorable kid.  Fred Gwynne brings something more. He’s so damned real to me. It may be the way he puts on his Mainiac accent, or something comforting about the fact that he was still kicking when the film was made in ’89. I wasn’t even a Munster’s fan – or at least not much of one. Nevertheless, Jud Crandall is someone I wish lived across the street from me too. I’d love to hang out on the porch and drink a few beers while watching semis race by in the night.

I remember going to see Pet Sematary in the theater (at Christiana Mall) on a date with several other friends. I always knew it wasn’t a good film, but that’s never stopped me before from liking a movie and watching it over and over again.

Don’t trust him, he’s mad besides the extra credit has more to do with King’s books and his monters

One comment on “I don’t want to be buried …”